Over 150 people have gathered at The Hold to mark International Women’s Day (IWD).

Attendees heard from five inspirational women, all from different backgrounds who are thriving in their chosen field.

The theme for IWD 2022 is #BreakTheBias and centres around celebrating women's achievements, raising awareness against bias and taking action for equality.

The conference opened with a welcome from the University of Suffolk’s Chancellor, Professor Helen Pankhurst who said “This year we are asked to ‘break the bias’. It feels to me this message is that much stronger than those of the recent past when we have been asked to ‘be bold’, to ‘press for change’, to ‘balance’, to ‘reach’, to ‘choose’; this year we have been asked to break. For me this is an indication of the urgency of the task, an acknowledgement that business as usual is just not working. This chimes with the findings from my work in the UK and globally and the experience, I am sure, of many of you seeing that gender inequality and wider discrimination is still very much part of the fabric of society; it lurks in all sorts of places and institutions. On this International Women’s Day, I suggest three steps forward. First, acknowledge that where we are is just not good enough. Secondly, the job of doing so does not belong to someone else. Thirdly, we must all actively demand more of ourselves and others with courage, calling in as well as calling out in order to break the bias and achieve systemic change.”

Debra Gingell, Business Development Manager at the University of Suffolk said, “We don’t like to think we are bias but we do actually practice bias whether that is conscious or unconscious bias. Having a day to celebrate women, with a theme and with a call to action is one of the most powerful things we can do. It’s about sowing the seeds of change and encouraging people to think differently.”

Dr Belinda Board CEO and Chief Psychologist at Peoplewise was one of the five speakers. Dr Board said, “We have to start standing up and using gender neutral language. Language matters. Nearly 5% of the English language starts or finishes with the word ‘man’. The 43rd most common word spoken in the English language is ‘man’. ‘Woman’ doesn’t enter the top 500. That’s quite frightening because we are making women invisible a lot of the time with the language we are using. It also reinforces this stereotype that is very towards the male bias. I think it’s important to disrupt language and to ask people to think about the language they are using.”

Sizewell C took the opportunity of International Women’s Day to announce their membership of Women in Construction, an independent organisation that promotes gender equality in construction. Dr Sarah Williamson, Sizewell C Director, spoke at the event and said, “We have to be the change we want to see that is why Sizewell C has committed to recruit 40% women into the business and is working with culture changing organisations like Women into Construction to promote gender equality.”

Daniella Lord is a Positive Action Recruitment Advisor for Suffolk Constabulary. Daniella’s role involves trying to shape a police force that is representative of the communities that we serve. Daniella said, “For Suffolk, we are not that far apart with our male and female split but what we are under-represented in is with certain specialities within the police such as firearms for example and women in high-ranking positions- those decision-making roles.”

Growth coach and mother-of-two, Babita Devi works part-time as the Innovation Director for the EpiCentre in Haverhill, a coach for the Judge Business School, a mentor for Barclays Eagle Labs and is an advisor. Babita shared this advice “Part of the challenge is about getting out of your own way and believing what is possible. Step into your potential, your power, your differences and your own greatness. If you fail at something, it doesn’t matter. It’s failure in your eyes but actually if you look at the flip side, it’s not really failure, it’s growth.”

Cassie McMaster, Co-founder of Leap Impact also addressed the audience. She said, “Breaking down bias requires support and that requires talking about biases we’ve experienced in our own lives so we can come together to really challenge them. Events like this conference is so important.”

The conference was organised by the University of Suffolk, Suffolk Chamber of Commerce and the Epicentre and coincided with a new free exhibition at The Hold called Women Don’t Do Such Things! Which tells the stories of pioneering Suffolk women whose actions changed the world.

The conference was sponsored by the European Social Fund project6, ICET. For further information on the ICET Project please go to  https://www.uos.ac.uk/icet 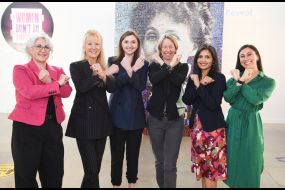 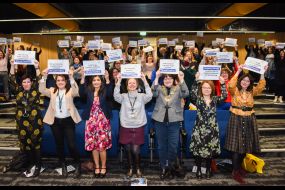 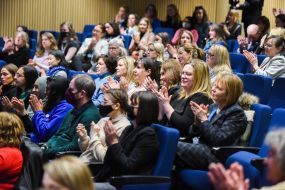