Hundreds of graduating University Campus Suffolk (UCS) students received their degree awards during the first day of ceremonies to be held at the Ipswich Town Hall and Corn Exchange today.

Amongst them was 46 year old Colin Lane from Kesgrave who graduated with a BA (Hons) in Graphic Design. Prior to starting at UCS, Colin was diagnosed with Hodgkins Lymphoma and underwent a stem cell transplant.

He said Before my diagnosis I was working in the print industry, I had thought about going to university and retraining in another career from time to time while at work over the years but never quite got round to it especially with a family to support and a mortgage to pay. My wife told me to go to an open day at UCS to see what they could offer me. I decided on graphic design as I could draw on previous print experience. Everyone was absolutely fantastic - both staff and students and to cut a long story short, here I am graduating - who'd have thought it. Would I have done the degree if I hadn't had cancer - I doubt it, not because I wouldn't have wanted to but more about getting round to it. So if I was to look at something positive coming out of having cancer this most certainly is it. I couldn't have done any of it without the support of my wife, Michelle."

"Im now working at Glowcroft Design and things are going really well. At the moment I am busy designing concepts for dog and cat advent calendars for manufacturers such as Pedigree, Bakers and James Wellbeloved for Christmas 2016."

Elliott Hefford from Leicester also graduated with a BA (Hons) in Graphic Design. During his time at UCS he was awarded the Graham Scott Typography Award. Elliotthas gone straight into employment as a junior designer at Kingsland Linassi. He is the second graduate from the course to be employed at Kingsland, the other being Yvie Ormsby who started working there three years ago and is now a Senior Designer at the studio.

Katherine Peskett from Kent joined her peers, Colin and Elliott, in graduating from the BA (Hons) Graphic Design programme. Katherine is now working in Client Services and Project Management for a web agency back home in Kent. She said My proudest moment at UCS was the Degree Show at the end of my studies. Seeing the product of everyones work on show in the gallery made it worthwhile. Receiving a commendation from TCM was a particular highlight also.

21 year old Rachel Leeder from Norfolk graduated today with a BA (Hons) in Film. Rachel is now working at iSite TV in Colchester as a Junior Editor.

Rachel says So far, going to UCS has been the best decision I have made. I had an amazing three years, met some great people and felt that I was given good advice and taught everything I needed to know to get me where I wanted to be career wise. I chose to study at UCS as the course was 50% production based and 50% theory based. I was able to make films but also learn about the history and theory of film making which was just as interesting and helped us all make better films as we had back round knowledge on filmmaking too.

Andrew Parker from Ipswich graduated with a BA (Hons) in History. He said I gained a place on the five week summer internship programme at the Insurance Broker Willis in Ipswich. This has been extended multiple times and I have now been working for them for four months. My ambition for the next few years is to do an MA in History. Longer term Id love to be working in the heritage sector.

1,281 students will be conferred at ceremonies in Ipswich this week. 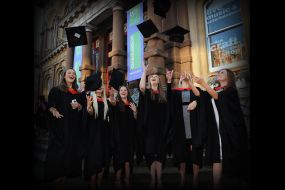