A group of games designers in Ipswich have been awarded a £10,000 grant after competing in a national competition.

The graduates formed ‘Miracle Tea Studios’ after coming together at the Eastern Enterprise Hub to take part in the Tranzfuser project.

The competition tasks graduate games designers with creating a game from an initial £5,000 grant, before developing it and pitching to industry professionals in a dragons-den style presentation.

After successfully progressing through the initial round in Birmingham, Miracle Tea Studios won a £10,000 grant in the final at Edinburgh – which will allow the group to release the game in 2017.

Speaking to the Ipswich Star, graduate Tom said “I was pretty excited – I was watching my emails constantly all day. I saw one from the UK Games Fund, read the first line and it said congratulations so I knew it was good news.”

Being based at the Eastern Enterprise Hub, the group was able to take advantage of guidance from university tutors and all the technology in place in a supportive environment.

Fellow graduate Bradley said “The lecturers here were giving advice that helped us look at the thing completely differently, and there were always messages back and forth.”

Rob Kurta, course leader for computer games design at the University of Suffolk, said: “The games team at the University of Suffolk are very proud of the recognition our graduates have gained from the UK Games Fund. This is a major success story for indie game development in Ipswich and it is a testament to the hard work and dedication of the development team. We wish them every success in the project.” 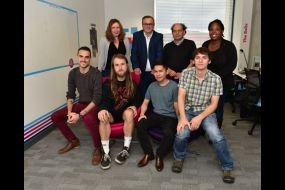