A University of Suffolk graduate has been named as the Undergraduate award recipient in the annual Royal Air Force Museum Awards.

Nick Black, who is an Armed Forces Veteran and former Police Officer, studied BA (Hons) History at the University and graduated at the end of last year.

The RAF Museum Awards are given to final year students on the recommendation of a selection panel composed of members of the RAF Museum’s Research Board. The bursary and prizes are awarded for writing in the field of ‘air power studies’, encompassing not only the history of air warfare but also related fields such as archaeology, international relations, strategic studies and others.

Nick received the Undergraduate prize for his dissertation, entitled ‘Revisiting the Battle of Barking Creek, 6 September 1939’.

Nick said “My dissertation is a forensic micro historical study of a friendly-fire incident that occurred just three days after Britain went to war with Germany in September 1939, and involved an RAF fighter pilot being shot down and killed by his own side after being mistaken for an enemy aircraft. The shot down aircraft crash landed just outside Ipswich. My research uncovered some interesting new evidence that changed the commonly held narrative of the incident and shed light on its impact on procedures before the eventual victory in the Battle of Britain of 1940. The essay was praised by the review board for being well-written and thoroughly researched and presenting new and exciting evidence.”

“The subject will be presented at the RAF Museum in talks later in 2021 and I am also in the process of amending the piece for submission for publication by the British Commission for Military History (BCMH) Journal.”

On hearing the news that he had won the award Nick said “I was so surprised and excited. Obviously, I knew that my dissertation stood a chance of winning, and I had written it with the intention of submitting it for the prize. But to actually get that recognition and to receive feedback from such a prestigious organisation that my research had actually uncovered something exciting truly made the whole three year adventure of studying for my degree worthwhile.”

Dr John Greenacre, Lecturer in History at the University and Nick’s dissertation supervisor, said “I am very pleased for Nick as he put a great deal of hard work into his dissertation. His meticulous research and analysis have resulted in the definitive account of this little known but often disputed incident during the Second World War.”

To find out more about the RAF Museum Awards please visit www.rafmuseum.org.uk

To find out more about studying BA (Hons) History at the University of Suffolk visit www.uos.ac.uk/history 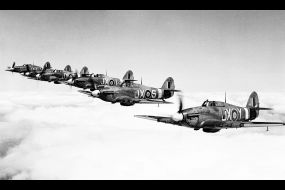