The first University of Suffolk graduation ceremonies have been held on the Ipswich Waterfront.

Hundreds of students from the School of Art, Design and Humanities and the Suffolk Business School received their degree awards during the first day of ceremonies.

Digital Film Production graduate Jordan Bloomfield was amongst them.

21-year-old Jordan, from Ipswich, is working at Eclipse Sound and Light Limited. He was named Student of the Year in both his first and final years at the University.

For his end of year project Jordan submitted a documentary about the discovery of the Anglo-Saxon Burial site, Sutton Hoo. He said, “After talking to my peers from the area I noticed that not many people knew that Suffolk was home to one of Britain’s greatest archaeological discoveries and so I wanted to bring it to a wider audience.”

“I had a part time job while I was at university (with Eclipse Sound and Light Limited) working at festivals, doing film production and live video. Since leaving Uni they have taken me on full time as a Project Technician and I am working around the country on events with Sister Sledge and UB40.”

“My course has solidified the skills I already had coming into Uni and it has made me more confident on being able to take those forwards and know what I am doing in the industry. My company do a lot of live sound work and this University’s film course has got a really sound heavy side or focus to the degree and that’s really helped me out in my understanding of sound theory so I can take that into the workplace.”

Jesse Easter from Norfolk also graduated from the University with a First Class in Digital Film Production. He is working as an editor at the production company The Visual Edge. He said, “It’s very surreal that it has come around so quickly.”

“The course encourages you to look for outside opportunities; we needed to get at least 80 hours of professional practice so that’s helped me get the job I am doing as well as, of course, the qualification I have. The friends I have made at University will be lifelong friends, especially with the course there is so much practical content you need to get along with the whole team.”

Alongside the students being presented with their degrees today was Patricia Godbold who received an honorary doctorate.

Patricia went to her first Ipswich Town match at Portman Road after World War II in 1946 with her father. In 1954, she applied and was successful in gaining the post of Secretary to the then- Manager Scott Duncan. Patricia worked for nine managers including Sir Alf Ramsey, Sir Bobby Robson and George Burley.

Patricia was PA to Sir Bobby Robson for 36 years and Company Secretary to his commercial business, at the same time working for four Chairmen and four Company Secretaries.

Patricia retired from working full time in 1997 and in 2004, on behalf of the Football Association, the Governing Body of Professional Clubs, David Sheepshanks the Club Chairman, presented Patricia with a medal for 50 years loyal service to football.

She said, “I was amazed when I received the letter from the University. I am very pleased, proud and honoured. I was brought up in Ipswich on a council estate and left a Secondary Modern School with no qualifications. I am humbled to receive this; it is beyond my wildest dreams.  I would like to wish those graduating, a happy and successful future.”

Tim Rowan-Robinson DL, was recognised for his services to raising the profile of the county and promoting tourism by being awarded an honorary fellow.

Following a career with Watney Mann, Grand Metropolitan and finally Whitbread, where his last role was as MD of their Hotel Division, Tim started his own business in 1996. With a friend, he acquired Thorpeness Hotel & Golf Club in 1996. The company now has six hotels. Tim retired from TA Hotel Collection in March 2018.

He has been heavily involved in the development of Tourism in Suffolk over the last 20 years. He is a firm believer in the importance of local Destination Management Organisations (DMO) and still sits on the board of The Suffolk Coast DMO. With two others, he started the Aldeburgh Food & Drink Festival and still chairs that company. In 2013, he was appointed a Deputy Lieutenant and is involved in a range of activities in the County.

He said, “I feel extremely excited and very honoured, slightly surprised but it is a tremendous honour. My main role over the last twenty years has been to try to get more people to come to Suffolk. I am very keen on this university and I think it is very important to Suffolk. I think everyone has done a fantastic job over the last few years to get independence and to set the University on the course it is on now. I was delighted to be involved in the rebranding of the University.”

Tim received his honorary fellow in front of Suffolk Business School students, some of the students studied Event Management and Tourism Management. He added, “I think they’ve chosen a very good career path to go down. I think tourism is something like 17% of the workforce in Norfolk and Suffolk so there are jobs there, unlike a number of other areas. It is also not too difficult to start your own business as well.”

1,402 students will be conferred at ceremonies in Ipswich this week. The graduations in Ipswich are the last of 2018. Other ceremonies have already taken place in Bury St Edmunds, Great Yarmouth and Lowestoft. 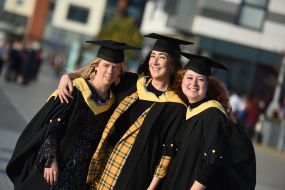