Dr Sharon Shoesmith, who was the Director of Haringey Children’s Services at the time of the death of Baby P, has addressed students and social work professionals at the University of Suffolk.

The event, organised in partnership between the University, the British Association of Social Workers (BASW) and the Centre for Social Work Practice, took place on Wednesday 29 March.

Dr Sharon Shoesmith delivered a talk entitled ‘Social work in the age of social media and posttruth’ which was followed by an open discussion with the participants.

It comes on the back of Dr Shoesmith’s book which was released last year. Learning from Baby P focuses on Peter Connelly, the toddler who died from multiple injuries. In November 2008, Peter’s mother, Tracy Connelly, her boyfriend, Steven Barker, and his brother, Jason Owen, were convicted of “causing or allowing” Peter’s death. It was reported the toddler had more than 50 injuries on his body.

Dr Shoesmith was held accountable for the failings in Baby P’s care and publicly ‘vilified’.  Her address to students comes just a week after they heard from Lord Laming at the University’s annual interprofessional conference. Lord Laming was responsible for the inquiry into the death of Baby P.

Associate Professor Dr Sue Hollinrake, Programme Lead for Social Work at the University of Suffolk, said “Over the past week our students have had the chance for a rich insight into one of the highest profile cases in the profession in recent times. The tragic death of baby Peter Connelly shows us that there is still much to be done to make sure we protect the vulnerable in our society. As a university we are always looking for ways to bring what the students are learning in the classroom and on their placements to life with interesting and thought provoking speakers. We were delighted to welcome Lord Laming and Dr Shoesmith and the opportunities for learning that both brought.”

Although not a social worker, Dr Shoesmith worked with the profession for 35 years in her roles concerned with child welfare. This year marks 10 years since Peter Connelly died and she told the audience “I have a strong sense of responsibility to say something back to social workers and to support you. My motivation is to change the vilification of social workers.”

She spoke of a theory developed in her book called ‘The Cultural Trope’ which claims the blaming of social workers is embedded in our culture. She explained this being devoid of reason, thought or understanding and is used as a defence.

“My main emphasis is on the perceptions of social work out there in the wider world and how that is very wrong as they are doing such an amazing job to support children and families and it is not often known or reported in the media or celebrated.”

“I am very keen social workers join professional associations like BASW and to enable BASW to become a stronger member led organisation that can support social workers particularly when things go wrong but can also communicate with the public to tell them more about the work of social workers and how they do protect children around the country, that’s the main issue that brings me to these sorts of gatherings.”

Robyn Kemp is the Director of the Centre for Social Work Practice. She said “Sharon’s perspectives on the details of the events leading to and following Peter Connolly’s death revealed just how counterproductive and damaging blame can be. Blame draws attention away from the crucial issues that we all share responsibility for, masks over deeper problems, shuts down dialogue and understanding, and damages relationships.  We strongly support Sharon’s call for social workers to collectivise by joining organisations like us and BASW to address negative public perceptions of social work and contribute to closer, more supportive relationships between the sector and the public. We will be holding a collaborative conference celebrating relationship based social work practice in February 2018 and welcome all.”

Find out more about studying Social Work at the University of Suffolk visit or come along to the Open Event on Saturday 22 April.

Find out more about the Centre for Social Work Practice 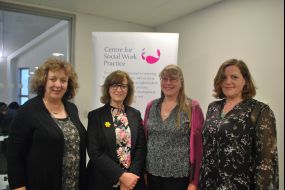