The Deputy Chair of University Campus Suffolks (UCS) Board has been recognised for her key role in developing higher education in Suffolk.

Celia Edey was awarded an OBE in the New Years Honours and was presented with the honour by HRH Duke of Cambridge in a ceremony at Buckingham Palace.

Celia has been instrumental in UCS plans to become an independent university and was honoured for her exemplary contribution to higher education in Suffolk and Essex. This began when she joined the Council of the University of Essex in 2006, becoming University Treasurer in 2010. In 2009 she joined the Board of University Campus Suffolk, initially as an Essex representative, and subsequently as an independent member, and now Deputy Chair.

Celia said I had a wonderful day and was delighted that it was HRH Duke of Cambridge who was presiding. We talked about how exciting it is to have a university in Suffolk and I mentioned how the county has waited a very long time since Cardinal Wolsey first proposed it! He was marvellous at making each of us feel special. The whole ceremony was impeccably organised and very touching and I felt honoured to be amongst many extraordinary people contributing to the country in so very many different ways.

Provost and Chief Executive of UCS Richard Lister said We were absolutely delighted to hear that Celia received the recognition she truly deserves in the New Years Honours. Celia has played a key role in UCS journey towards independence and in the creation of our Foundation Board. I wish to offer Celia my warmest congratulations.

Vice-Chancellor of the University of Essex, Professor Anthony Forster, said: Celia has provided us with invaluable support, both as a champion and a critical friend. She has brought passion and conviction to her engagement with the University of Essex and University Campus Suffolk; taking on significant responsibilities to help us make a lasting contribution to the communities we serve. We are delighted that Celias contribution has been recognised.

Celias outstanding record of public service spans 30 years. In addition to UCS and the University of Essex, she has sustained significant commitment to other education and health charities and the criminal justice system. As with her contribution to higher education, in each of these other areas, she has gone considerably beyond the normal expectation.

She served as a Magistrate in Essex from 1984 for 23 years, holding the roles of Chair and Deputy Chair of the Essex Magistrates Courts Committee for a total of ten years. She was also a member of the management committee of the Central Council of Magistrates Courts Committees. She continued to support the criminal justice system through her Deputy Chairmanship of the Chelmsford Prison Visitors Centre. For 12 years, through the 1980s and 1990s, as a Non-Executive Director of the British Lung Foundation, she served on its Ethics Committee and set up its national Fundraising Committee. She was a founding trustee in the Romilly Forshall Foundation, an overseas childrens charity. 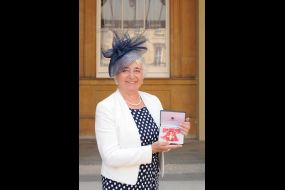