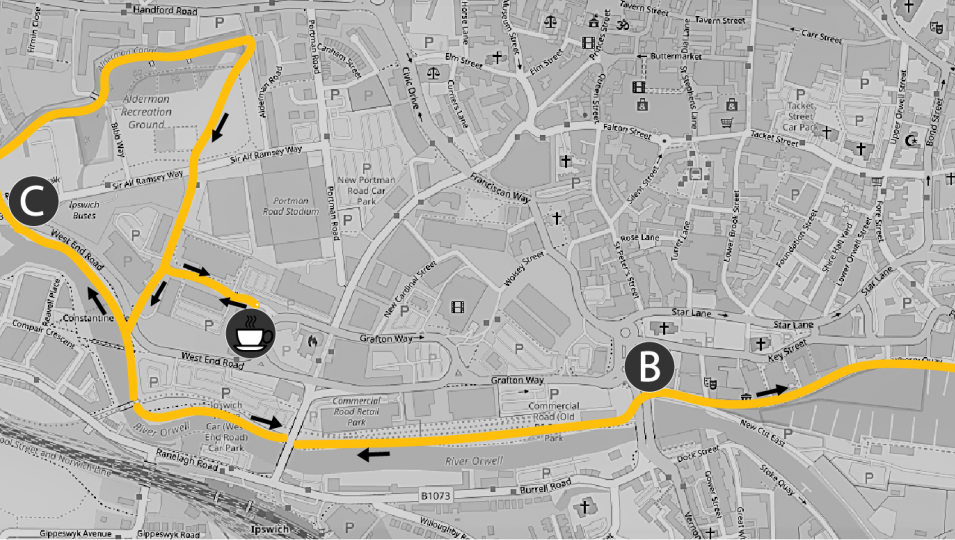 Following from Richard's Waterfront Wander Walk No. 1, here is another one.

Starting Point: University of Suffolk Question Mark, next to the Waterfront Building

Terrain: All tarmacked or gravel paths – fully accessible for wheelchairs/scooters/buggies

A: Depart westwards along the waterfront from the giant question mark. Pass under the Jerwood Dance centre and continue towards the main road. Notice the large red-and-white buoy once belonging to Trinity House, the national institute who look after lighthouses and deep-water navigation buoys. Cross the road via the traffic lights and head down the ramp past the statue by local sculptor Laurence Edwards which depicts a rower struggling against the stream. From here you can follow the riverside route but be cautious as the tarmac path is narrow with the tidal waters of the river Orwell immediately below you. Notice the water level, which is reflective of the tide. If the river is flowing the same way you are walking, the tide is coming in. If it is flowing back towards the waterfront, then the tide is falling. Maybe it will have changed on your way back. Walk alongside the river and pass under the station bridge and then under an old railway bridge which once connected the station and the main line on the other side of the river, with the network of lines at the waterfront. All the lines on this side of the river are now closed and the bridge has fallen into disrepair.

B: The next bridge, Bobby Robson bridge is a striking feature, once the second highest structure in the town. It is named after the football manager who brought some success to Ipswich Town FC in the 1970. Unless the tide is exceptionally high, the weir you can see below the bridge marks the high-tidal point of the river Orwell, over 10 miles from the open sea! Once you are level with the weir, you can either walk on the well-worn dirt path through the wildflower bank, or make use of the pedestrian crossing and cross the road to use the wider main pavement. You may see that at this point the river splits. This area used to be a network of waterways and marshes, but was progressively drained, with waterways contained to allow for modern development. If you have chosen the path through the wild flowers, you will need to cross the road by the next bridge across the river. It can be busy here: you may prefer to cross at the pedestrian crossing, which is a short distance back along the road.

C: After you have crossed the road, look for an information board labelled ‘Canals and Navigation’. Follow this gravel path, keeping the river on your left. Examine the weir and the last remaining stretch of riverside reedbeds that lie beyond. You are now leaving the main river behind and following a short stretch of water called The Alderman’s Canal. This once was a free-flowing waterway called the Little Gipping, which wound through the marshes, but was stopped at one end in Victorian times, providing a stable stretch of water for local industry. The canal is no-longer navigable, but makes an ideal wetland habitat for wildlife, right on the edge of town. The gravel path ends at a small public square. Turn right and head across Alderman’s park towards the children’s play area. When you reach the road, cross in-front of the main bus depot. Follow Constantine Road until the junction with Russel Road. This leafy, modern and very European road, houses the headquarters for Suffolk County Council and Ipswich Borough Council. You can stop for refreshments at Cool Beanz Coffee house café.

D: Head back to the junction with Constantine road and turn left, which brings you back to the pedestrian crossing near Bobby Robson bridge. After crossing the road, turn left and retrace your steps alongside the river to the waterfront where you began.

You can read another of Richard's blogs here about: Outdoor Exploration Apps for Exploring Suffolk