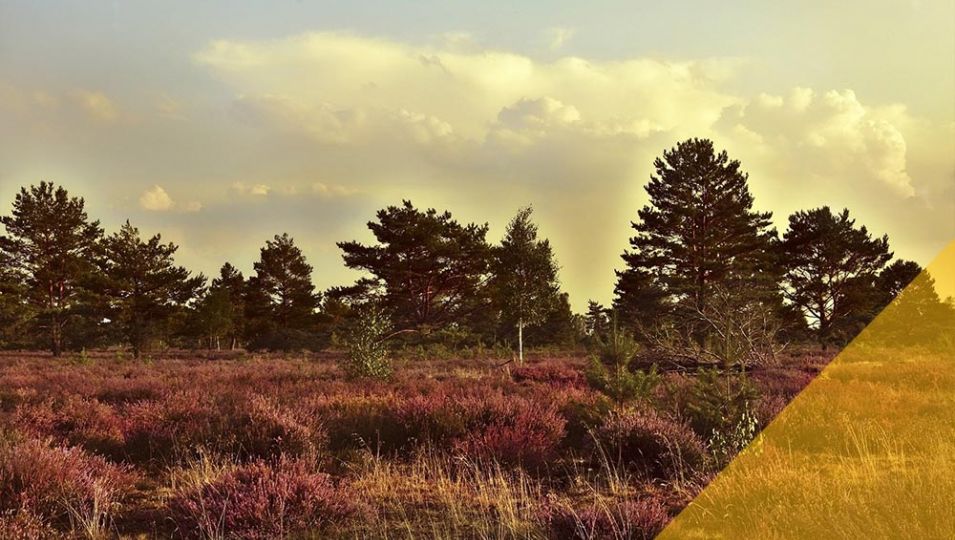 Growing up, the carefully tended limits of our suburban garden opened up onto heathland; a quick hop over the fence and my brother and I were birthed into a vast wilderness.

We headed first to the large dip in the middle of the heath. There were rumours amongst us that this was a bomb crater, a relic of World War II.  In our imaginations, the wrecked car which sat precariously at the bottom of the slope had belonged to a German soldier.  My brother, who read his weekly Commando magazine from cover to cover, directed me in our re-enactment of the drama: me running down the slope, falling down into the bracken having been caught by his enemy fire, only to be resurrected in order to play the game one more time.   Sometimes, the rough boys from the other end of the estate would come to ride their Chopper bikes down the crater’s bumpy slopes, wrenching their handle bars at the end to achieve a spectacular skid, the sand scarred by their wheels.

During the heatwave of 1976, these same rough boys, bored of endless leaps and skids on their bikes, investigated whether it was possible to set fire to dry grass using only the sun’s rays and a magnifying glass.  The fire licked across the parched bracken and gorse, threatening the houses which backed onto the heath.  When we returned from our biennial trip to my father’s homeland of California, we were struck by the similarity of the two landscapes. ‘It’s been hot here too, no water for weeks,’ a neighbour told my dad, as he looked despairingly at our crisp, yellow lawn.

As it had when destroyed by the Luftwaffe’s bombs in 1942, the heath began to re-generate itself after the fire.  We would occasionally find pockets where the earth remained scorched: charred sticks like burnt bones, the faint scent of smoke. Lying hidden amongst the bracken, we would examine the curled fronds of new growth coming up through the blackened earth, miraculously twisting towards the sun.  Here, in these secret places, waiting to be found during day-long games of hide and seek, we too would turn our faces towards the cloudless sky.  Somewhere nearby, an early bee hummed and then paused, having found the yellow blooms of a gorse bush.  Overhead, high in the sky, a gull appeared and disappeared as it drifted aimlessly in and out of the sun’s rays.

Eventually, there would be a distant shout.  The seeker had given up.  Arising from our loamy beds, brushing off knees and elbows, our compass was the church tower and its lighted cross down on the main road.  There, on the high ground of the heath, its usually looming grey presence was made diminutive by the vast Suffolk sky.  Weary with play and stillness, we turned our backs on the sun and made our way home, passing the thorny gorse, our hands bouncing along the top of the bracken as we walked.

Image by Peggy Choucair from Pixabay