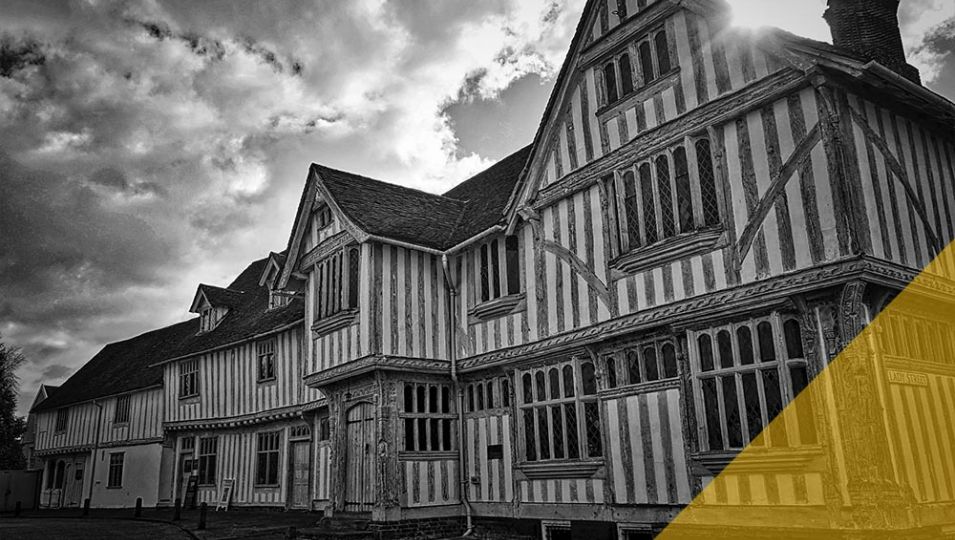 Mary tied her shoelaces, through the loop and into the castle – the way her mother had taught her; picked up the singular key hanging by the door and felt the wind twirl up her skirt as she made her way to work.

Growing up in a remote village called Shimpling, Mary was the daughter of William - a livestock farmer, and Elizabeth - a former seamstress. At the age of eighteen, she had acquired all of the skills needed to set upon her own life in the neighbouring village, Lavenham – a wealthy town, renowned for its wool trade. Mary had travelled by horse to a family friend, John, who offered her a small attic bedroom in his thatched house, on the agreement that Mary made his winter clothes.

The Market Square was warmed by the morning sunlight. The smell of bread lingered through the air as Mary walked past the bakery, her senses intertwined. It was intoxicating, her stomach rumbled at the thought of consuming it. Following the scent like an animal, Mary made her way to the Guildhall, ready for work. Dormant butterflies started to flutter in her veins as she allowed herself to get excited. Her whole live stretched out ahead of her like a perpetual rainbow.

A small man appeared in the doorway; his body was covered in a crisp dirt that stained, head to toe. He wore wooden-soled sandals with leather straps which stuck to the floor like a magnet. In a rich Suffolk accent, Mary was instructed to walk around back where a gentleman called Thomas would show her the ropes. A unanimous baa greeted her on arrival; it was a sound she remembered from her childhood. Thomas was a tall, stern man, who rather than spoke, grunted and pointed to what he wanted. At first, he was difficult to understand, but Mary soon deciphered his code, Aigh meant she was doing something right. By five o’clock, the duo had sheared almost fifty of Suffolk’s finest sheep and bagged up the wool to be distributed. Thomas said that his wool had been sent to Russia last month and in return, paid him a wealthy sum. With this, he bought enough grains to last him until spring.

‘You’ve got yourself a job’, the small man said as Mary left the Guildhall.

‘Wednesday week we’ve got a large shipment off to Essex, so you better shear those sheep until there’s wool coming out of your ears!’

Mary walked home with a spring in her step. The market had closed for the day and the distant sound of civilization hummed in the night. With her new home in sight, she rummaged for her key and found a large clump of wool - Mary kept it as a souvenir. As she turned the key right, John was sitting in front of the roaring fire, rubbing his hands together for warmth.

Image by memorycatcher on Pixabay