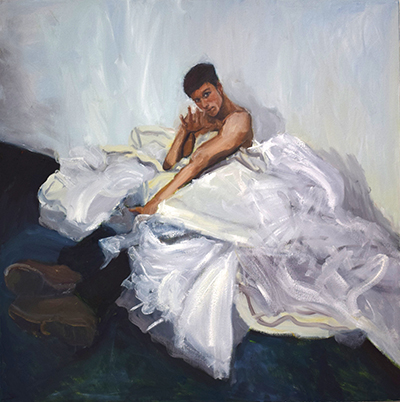 This exhibition is a collaboration between artist Annabel Mednick and Leo Collins, it is an exploration in paint of the life and capability of an intelligent, articulate young man in which his disability is acknowledged.

The project began in 2015 when Leo who is transgender and has cerebral palsy approached Annabel as he was interested in working with an artist. He wanted to show that disability and constant movement is not a barrier to exploring life.

Annabel is a professional artist who works mainly in oil on canvas. She has exhibited internationally and has won awards for her work which , including at the BP National Portrait Gallery portrait awards.  She often works thematically over periods of time to create bodies of work to be presented in their entirety.

The idea of painting and drawing someone who constantly moves and had altered thier external appearance to fit more with what they felt like on the inside, appealed to the artist. This two yeart project has resulted in a body of work that incorporates paintings and drawings alongside film, sound and poetry. The exhibition invites the viewer to look at the person rather than the disability but without pretending that the disability is not there.

This exhibition will be supported by a series of events that promotes discussion around the themes of capability and identity. 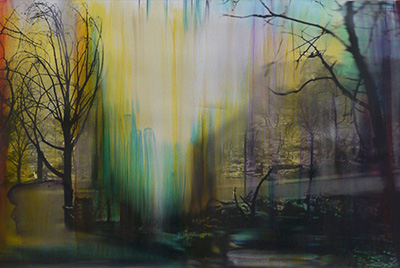 "To Have risked so much in our efforts to mold nature to our satisfaction and yet to have failed in achieving our goal would indeed be the final irony." Rachel Carson, Silent Spring

These works are part of a feverish search to find the iconic moments and reimagined tipping points for the human footprint on the natural world. In selecting the source material of steel engravings, I see how we sought solace, science, and romantic illusions in our quest for understanding nature. As a curious artist, I gauged my own complicity, my own desire as I looked to the images of animals and glorious landscape. These form a forward, a kind of prelude to what has come to be known as the Anthropocene era. One is at a loss to point to any single event, but perhaps it is like pages from some history book floating wholly from the sky, resulting from some catastrophic fire.  Aside from any sense of reason, some things burn, some things don't.

This exhibition is supported by a lecture and launch evening on the 22 March, for FREE tickets please contact Carol Gant at c.gant2@uos.ac.uk

An exhibition of new work made by first year Fine Art students from University of Suffolk (Ipswich) and Otis College of Art (Los Angeles) in response to walking in their respective urban environments.

Art Foundation students from One have explored multiple pathways in Fine Art, Graphics, Interiors and Exterior Design, Photography and Fashion and Craft selecting their favourite piece to be exhibited in the Waterfront Building, University of Suffolk. This celebration of work highlights the dedication and focus of the students at One who are soon to embark on their university courses or employment within the creative industries.  One have enjoyed working closely with the University of Suffolk on this project and continue to build upon our strong links between our students and UoS.

PhotoEast is a not-for-profit organisation which believes in the power of photography to bring positive change for individuals, communities and the places in which they live.

Thier vision is to establish Suffolk’s reputation as a centre for excellence in photography by hosting world renowned photographers and their work and inspiring participation from across the arts, education, business and local community.

Core to thier ambition is the biennial PhotoEast photography Festival which brings the work of some of the world’s more renowned photographers and photojournalists to Suffolk. Its focus on Ipswich, with its epicentre on the Waterfront, is now a significant visual arts event in the regional and national calendar.

The 2018 festival runs from 24 May to 24 June. Under the theme of ‘Belonging’, the festival will explore what ‘Belonging’ means to ourselves, our identity, our relationships with one another, our surroundings and our communities.

The festival is produced in partnership with the University of Suffolk.

The School of Art, Design and Humanities are proud to be hosting the annual End of Year Show 2018 in the Arts Building at the University of Suffolk.

Dr Lisa Wade, Head of Arts and Humanities welcomes you to enjoy the End of Year Show at the university in 2017:

Once again, our End of Year Show represents the efforts and achievements of our student community across a broad range of disciplines.  Creativity and Critical Thinking form the basis of our student endeavour and we are pleased to share the final results with you all. Do come and join in our celebrations as we congratulate our lively student community on the fulfilment of their academic journey this summer.

You are invited to share in the celebration of our graduates’ achievements and we look forward to presenting work from the following courses:

One man, one studio, some stuff…and a whole LOT of Nature.

We’re thrilled to be showing Mark’s work here at the Waterfront Gallery. The creatures he meticulously creates out of Fimo modelling clay or pipe cleaner, which he places in a fantastical landscape, don’t just draw on likes of Henri Rousseau or Pablo Picasso, but recycle them, as Mark says himself.  He uses the humour, nature, and surrealism and recycles them into something new and beautiful in every one of his artworks.

As Mark himself writes:

The dawn chorus. Like the first morning, as the song goes. Listening to the birds and connecting to an earlier consciousness. To Arcadia.

Meanwhile the birds go back to their nests in buildings, their feeding holes on sewage farms and rubbish tips, or they hang off my plastic birdfeeder. Not so wild then. My clean slate of Edenistic Romanticism is looking a little fogged.

When I think of the crowd that have written all over that slate – Poussin, Blake and the Ancients, Picasso with his Primitivism and his friend Rousseau’s primal jungles to name a few, then it’s looking quite well covered. I’d also add Piaget’s stuff about play learning (I was a teacher) and I’m beginning to acquire more stuff than my little head can hold. The stuff of ideas. So much is so beautiful I don’t want to clean the slate.

Take Blue Planet 2. Not just the primal nature content, but the technology and human endeavour to bring it to us. But in the end it was also about wrecking the planet with too much stuff. So, recycle. Recycle plastic, packaging, Poussin, Picasso and Piaget.

Virgil tells me that Arcadia is a state of mind that has to be lost in order for it to be recreated on a higher plane. So, this is on a stage one foot above my studio table. This is where I recycle stuff. I recreate my version of nature from recycled ideas, cardboard and a whole lot of other stuff. 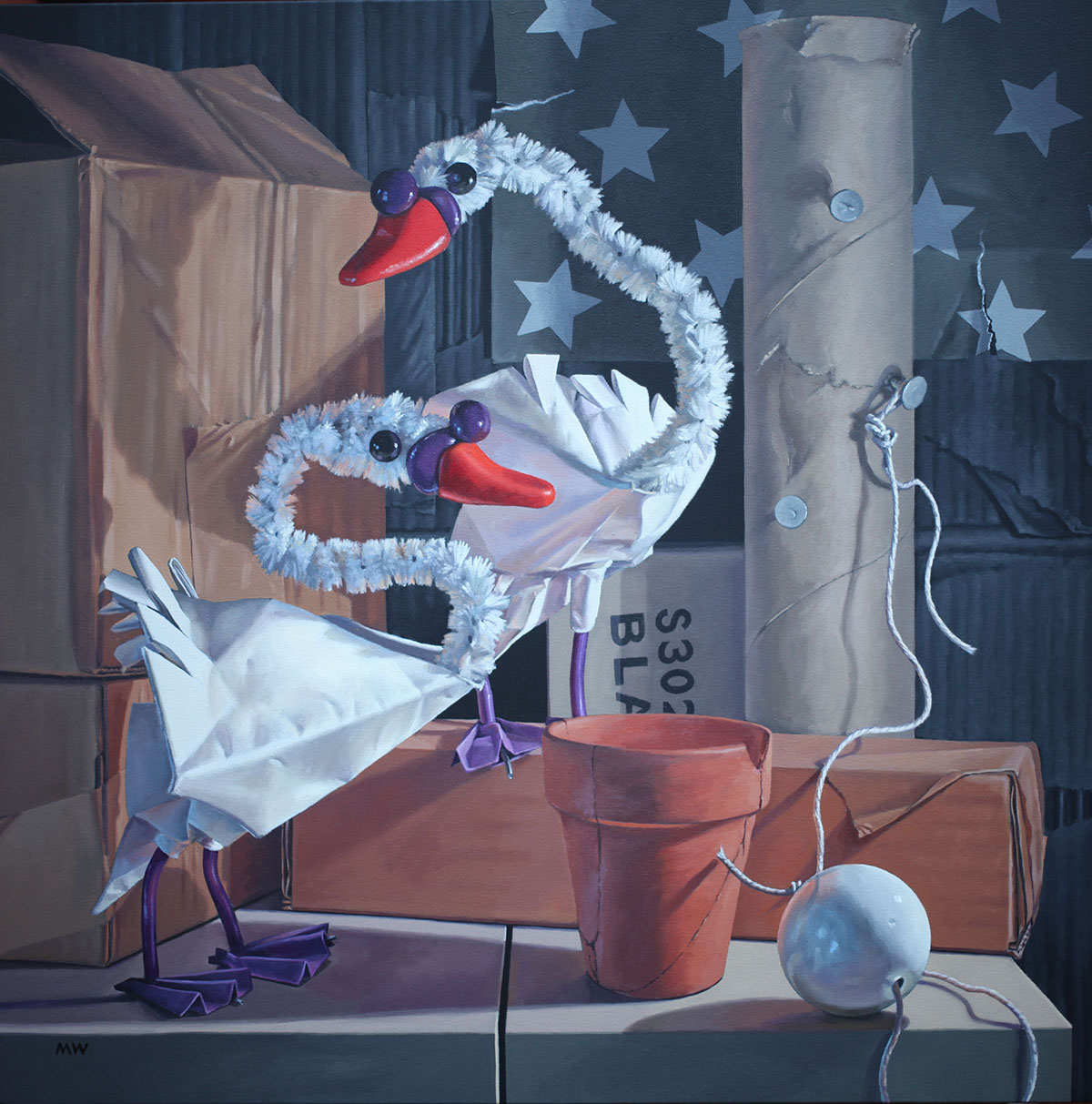 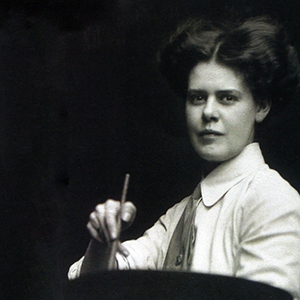 2018 Exhibition and Awards. The exhibition features works from artists aged 16 - 20 and is named in memory of Anna Airy.

The exhibition has run since 1964 to promote young and emerging talent. It attracts well over a hundred of entries from schools and colleges in the area. It will be opened to the public from the 18 November and will be closing 29 November 2018. The private view will be held on 18 November.

Carol Gant, Arts Curator at The University of Suffolk, said, 'We are delighted to host the Anna Airy Award Exhibition 2018, showcasing the wealth of emerging artistic talent among young people within our region. Organised by the Ipswich Art Society, the exhibition is aimed specifically at young artists and we look forward to receiving this year’s entries.'

The Award Fund was set up in 1965 in memory of Anna Airy (1882-1964) . She was one of the most distinguished painters of her generation with work represented in many major national collections. During the First World War she was appointed an official war artist. For 19 years she was President of Ipswich Art Club (as the Ipswich Art Society was then called).Anna Airy was also regarded as a brilliant and inspirational teacher by her students at Ipswich School of Art and, in the Art Club’s Annual Exhibition, she always included a ‘student section’ to give younger artists a chance to exhibit their work in the public setting of agallery. The Society has continued the tradition by arranging independent exhibitions of students’ work in association with schools, colleges and the University.