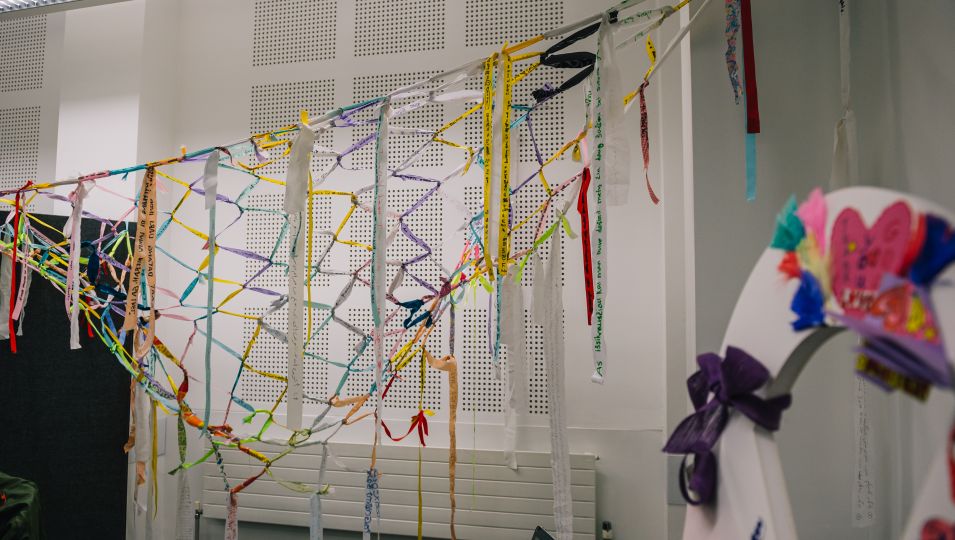 As a freshly appointed staff member, attending the ‘Safety Nets Re-imagined’ conference on the 5 November 2019 was, in equal measures, an inspiring, energising and sobering introduction to my new role.

Before introducing the first speakers, Dr Olumide Adisa who co-organised the event with Fiona Costello, set the tone for the event by urging attendees to remember that domestic abuse does not only affect distant ‘other people’ whom ‘we’ observe and theorise about; lived experience was an insistent presence throughout the conference, vividly represented through the stories, artworks and case studies of survivors and the testimonies of practitioners. In a political and cultural climate where migrant survivors in particular are often relegated to the periphery, this centring of their voices was striking. 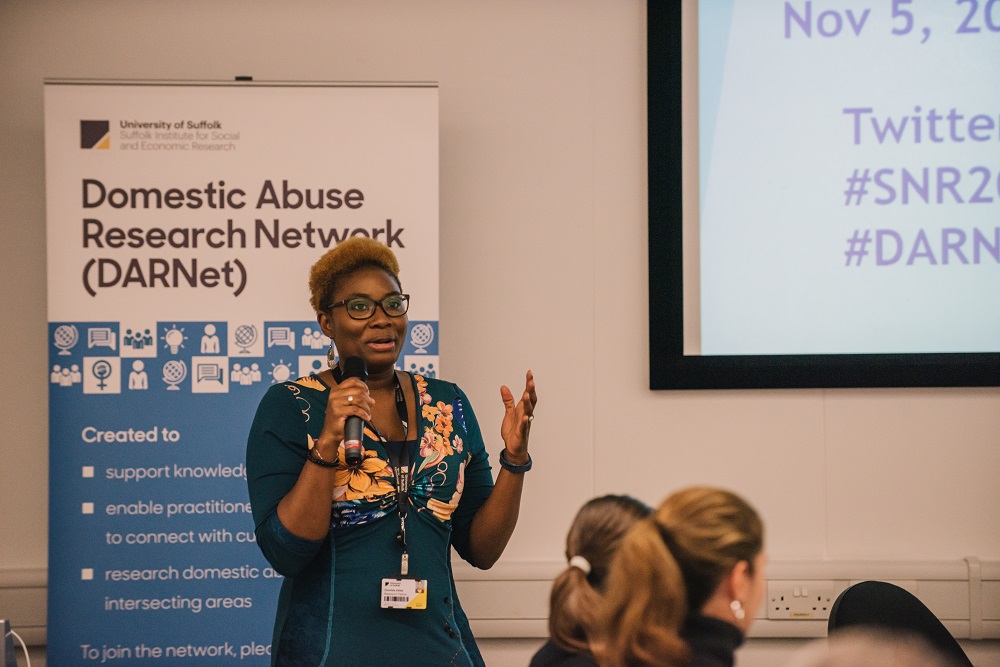 Equally, learning about the innovative steps that agencies are taking to close the gaps in provision identified at the outset of Project Safety Net Plus (PSN+) – adopting a collaborative, flexible and needs-led approach, rather than defaulting to the risk-focused ‘tick box’ thinking that can predominate elsewhere – inspired optimism about the local picture for survivors. As Olumide observed, ostensibly ‘universal’ services can often be ignorant of, or inattentive to, the needs of socially marginalised people. However, by working to create a robust safety net, we can arrive at a universally accessible network of services – one that simultaneously recognises survivors as individuals with intersecting needs and vulnerabilities and ensures that any survivor can access support, regardless of migration status.

One of my main takeaways from the conference was the critical need for change at a national level. As the speakers Gisela Valle, Elizabeth Jiménez Ya̴̴̴̴nez and Janaya Walker argued, perpetrators routinely weaponise migrant survivors’ fear of “destitution, detention and deportation” to prevent them from leaving abusive situations, essentially enlisting the state – and its punitive immigration policies – as an enforcer. Until policymakers acknowledge this complicity and reckon with the ways in which the current political and legal landscape increases survivors’ sense of precarity and marginalisation, survivors from migrant communities will face unequal access to life-saving services. 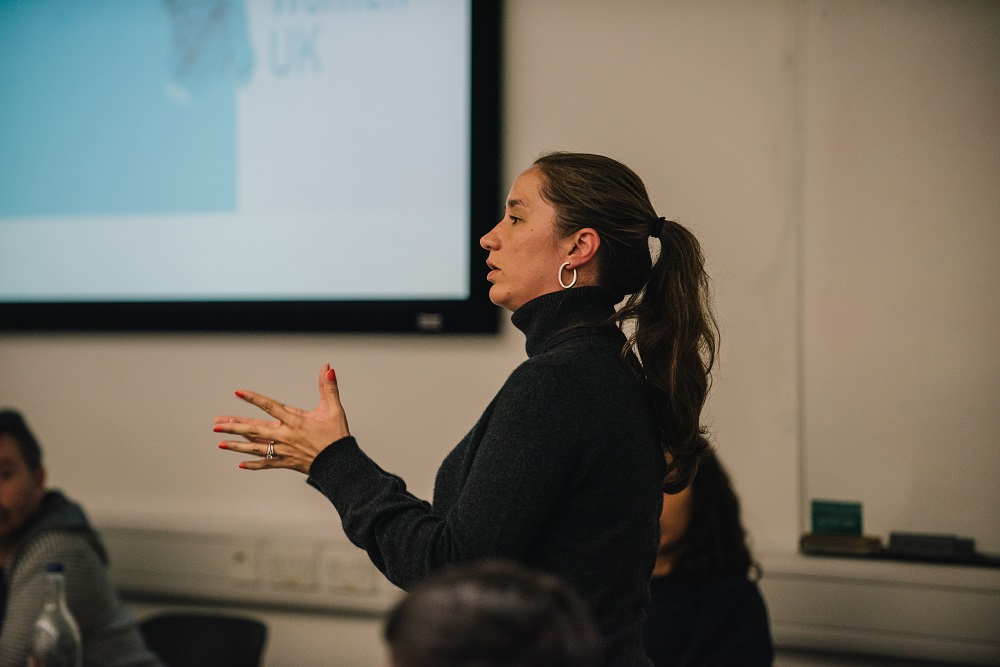 The evening ultimately served as both celebration – of the strides already made in improving provision locally – and a galvanising call to action, inviting attendees to think about “what kind of society we want to be” and what steps we can take to achieve it.

The event was designed to explore the concept in relation to the needs and interests of migrant survivors, a question that remains under-researched; the literature review yielded only nine evaluated interventions (Adisa, 2019). Combining research, stories, artworks and testimonies of practitioners, event contributors had been invited to reflect on the meaning of a safety net, exploring the associations the concept holds for them, identifying the barriers that prevent survivors from accessing services and articulating visions for accessible, culturally-responsive and effective domestic abuse provision. 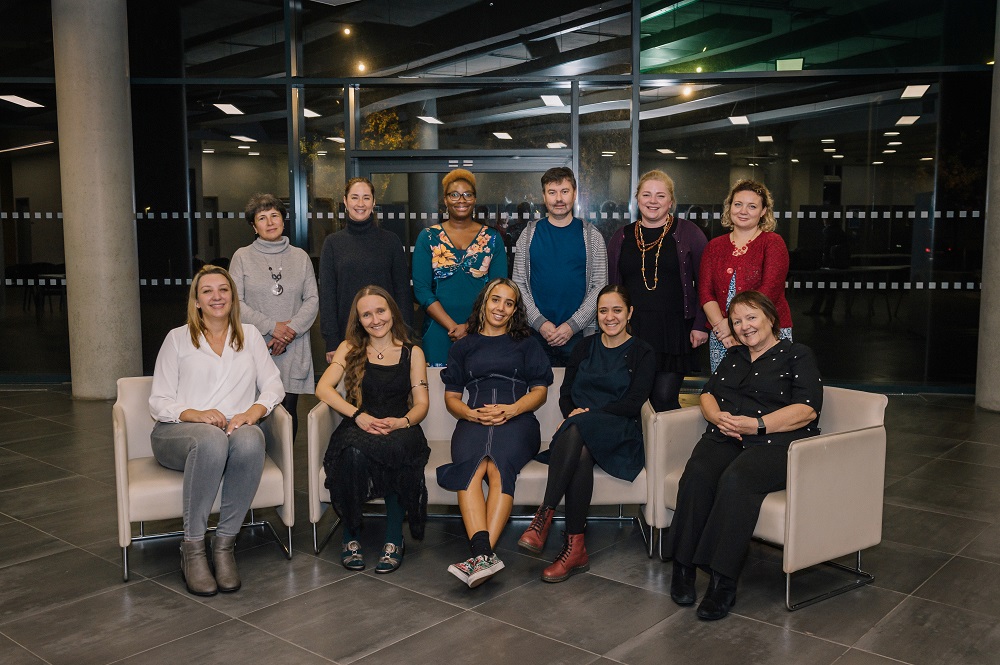 The initial section of the programme showcased the contributions of the local artists, practitioners and survivors who had created powerful artistic and narrative explorations of the concept of a safety net.  Showcase co-creators: Creating expressions of hope – Lois Cordelia, Michelle Francis, Leeway/PSN+ Community Advisors and Gyros

Michelle Francis described how survivors and PSN+ Community Advisors collaboratively produced their artwork, with women writing accounts of their experiences of abuse on ribbons, which were then used to weave a literal ‘safety net’. Participants found it therapeutic to write their stories and see their personal experiences represented anonymously in a community artwork – an “in-between” mingling of public and private. Michelle characterised the net as a visual metaphor for what can happen when survivors work together: “when you’re alone with your story you’re very isolated, but when we come together, we can form a safety net.” 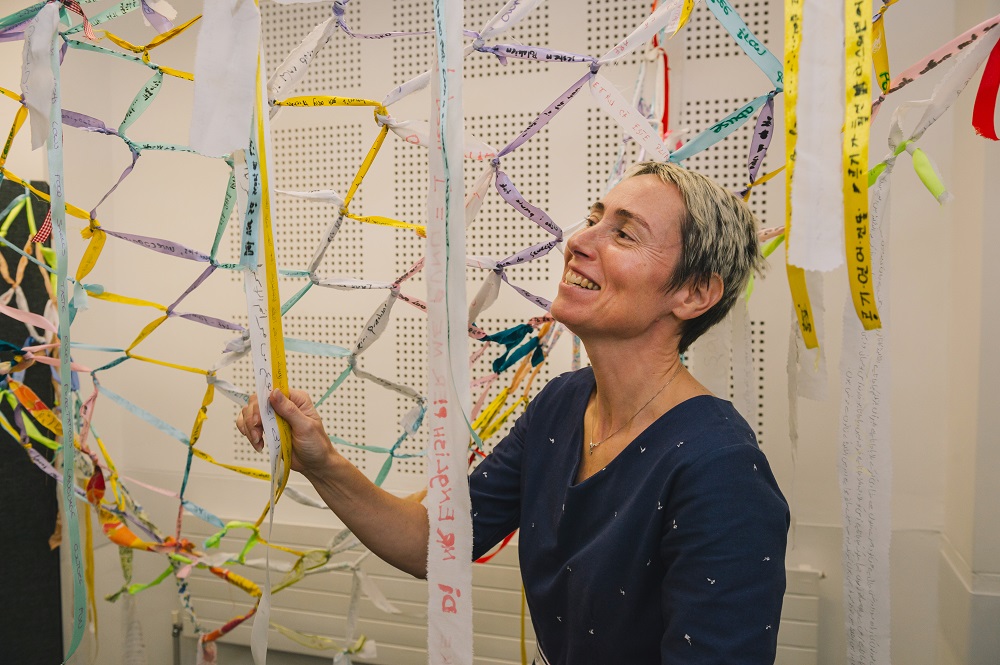 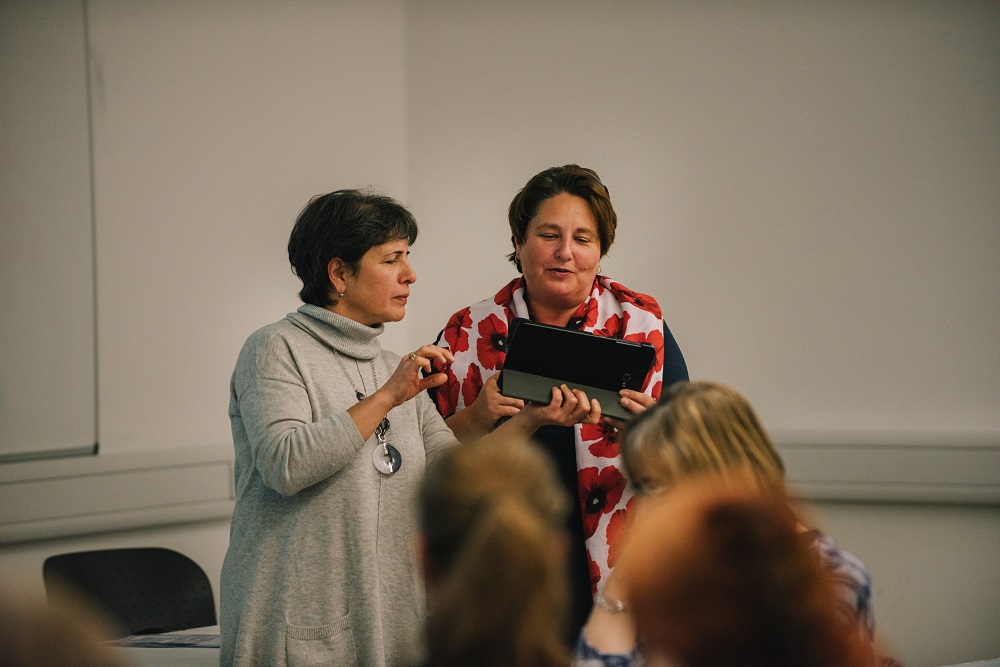 Lottie, a worker from GYROS, facilitated a quilt-making workshop based around exploring what a safety net looks like for their service users. Participants pinned their answers to the quilt, with their feedback shaping the finished product. Fittingly, given the “subversive history” of quilts, the workshop provided a space not only for sharing stories and ideas but for voicing “demands and protest”, with women’s comments including calls for systemic change as well as more immediate forms of support. 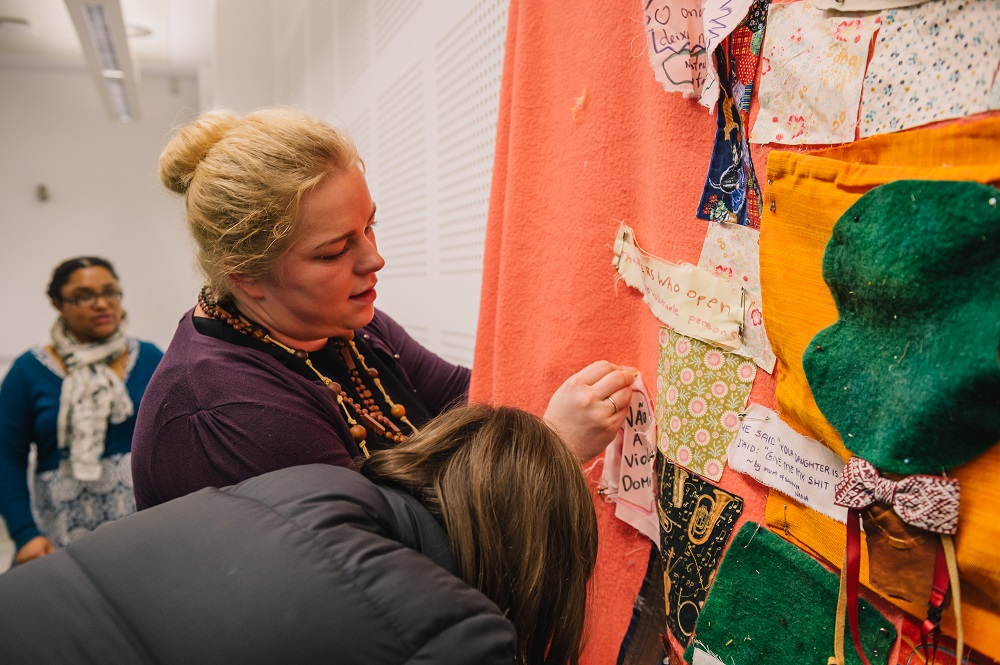 Working with cut-paper, acrylics and video, Lois Cordelia produced a mixed-media exploration of the nature of safety nets, evoking the “gaps” survivors can slip through.  Her striking cut-paper piece, which depicts a woman falling into cupped, outstretched hands, forms the frontispiece for the Evidence Brief-Literature Review. She also created a short video based on the concept of "Safety nets" and how she created the artistic piece. 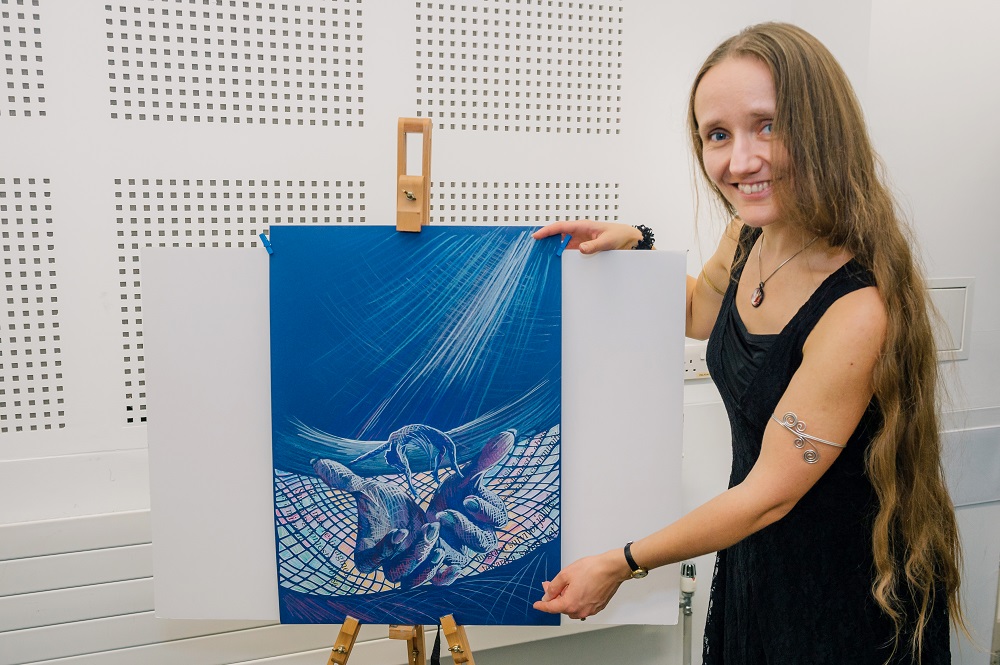 Louise welcomed and introduced the panellists. 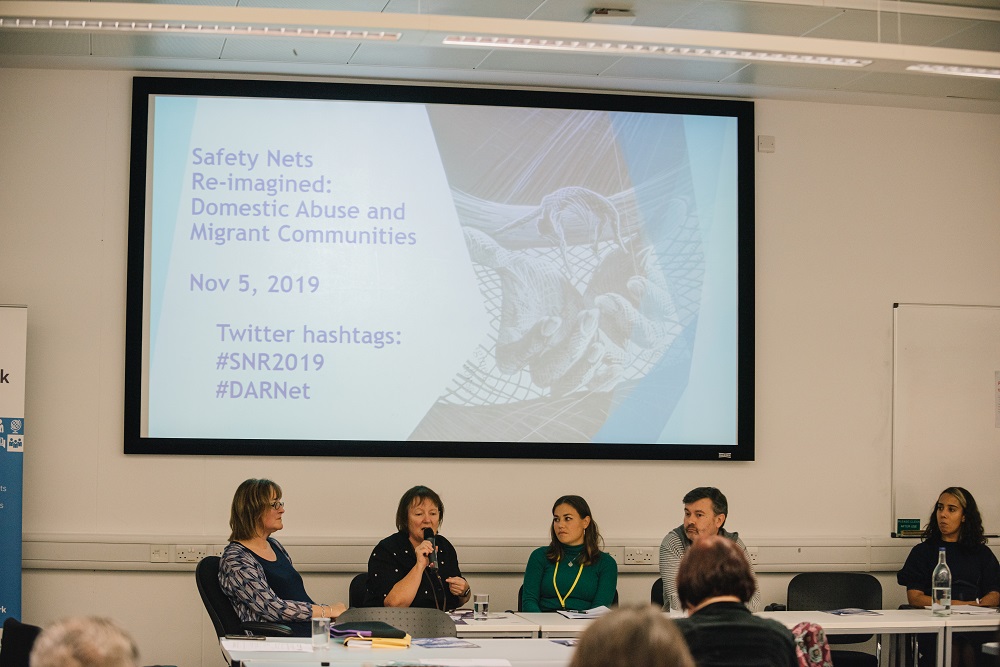 Louise recalled that she had actually suggested the name ‘Project Safety Net’ during the early phases of the project – ‘Net’ being short for network, as coordination and collaboration between services is crucial for providing effective support and protection for migrant survivors. The assembled Panel speakers reflect this need for cooperation and knowledge-sharing, with representatives from a variety of local and national, statutory and voluntary, services.

A number of key themes emerged during the Panel discussion, including the clear and pressing need for specialist services, the provisions that are already in place to accommodate migrant survivors – but are often obstructed by “gatekeepers” operating under faulty assumptions – and the moral imperative to put survivors’ safety first and create services that are accessible to all.  Several cited the hostile environment and other wider cultural issues as a contributing factor.

Margaret observed that PSN+ is like a “pipedream” realised, as it corresponds to such a clear need in the region. Prior to the inception of the project, she recalled getting calls at 4pm on Friday evenings requesting urgent support for migrant survivors. On hearing the “dreaded words – no recourse to public funds”, doors would simply “slam shut in your face”.  Simon Shreeve described police officers having to “dip into their own pockets” to secure emergency accommodation for survivors of NRPF status, who would otherwise have been forced to sleep in the streets or return to abusive situations. Hana noted that in the 18 months it has been operational, PSN+ has supported over a hundred people. This demand underlines the importance of services that are specifically tailored to the needs of migrant survivors whose pathways to disclosure, safety and beyond may look very different from those offered by generic domestic abuse services. 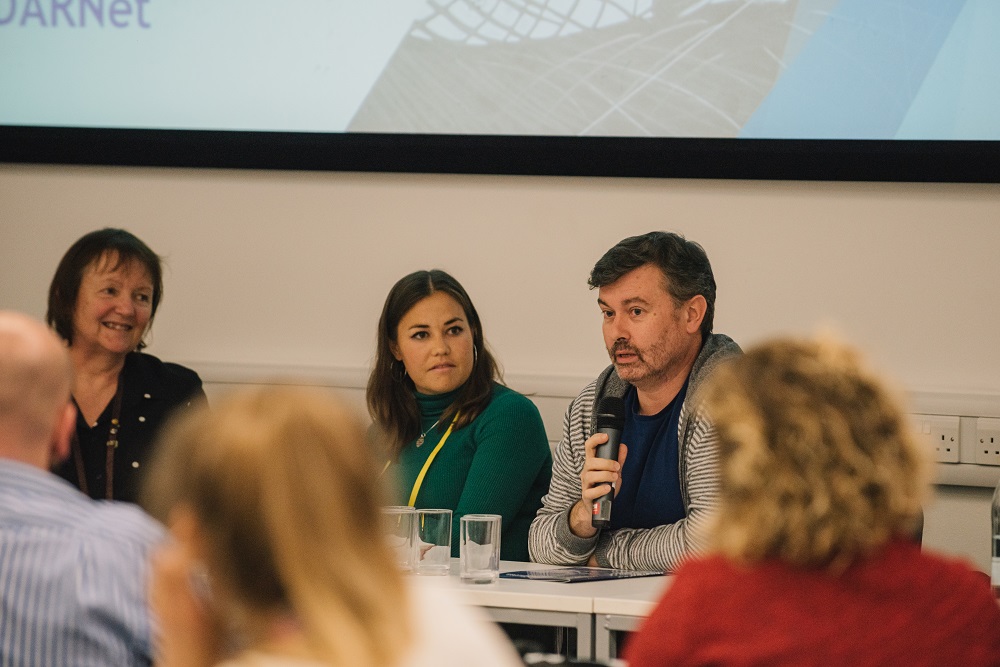 ‘Mainstream’ services lack expertise in many of the issues confronting migrant survivors, while specialist services are often under resourced and edged out of the commissioning process by larger organisations. Olumide noted that a “universalising” approach does not meet the needs of all survivors and often fails people from marginalised communities, whose particular needs and interests can become an “afterthought”.

Louise and Janaya noted that, in a significant proportion of cases deemed NRPF by one or more “gatekeepers”, survivors were in fact legally entitled to services.   Between July-September 2019, Southhall Black Sisters challenged Local Authorities on 18 occasions for inaccurately advising migrant survivors about their status and accompanying rights, while PSN+ have been challenging approximately 50% of cases deemed NRPF – gatekeepers in such cases are giving dangerously “bad advice” (Louise).  Hana observed that access to accurate legal advice gives migrant survivors the “knowledge and power” they need to leave abusive situations.

Accurate information regarding legal rights is particularly important for migrant survivors as their legal status is frequently “weaponised” by abusers as a means of deterring disclosure: Gisela and Elizabeth cited one IMKAAN study (2010) which found that 92% of women surveyed had faced threats of deportation by their abusers, while 54% feared being disbelieved or not supported if they chose to report. There are complex barriers to disclosure for women whose legal status is in question, with many fearing “destitution, detention and deportation”. 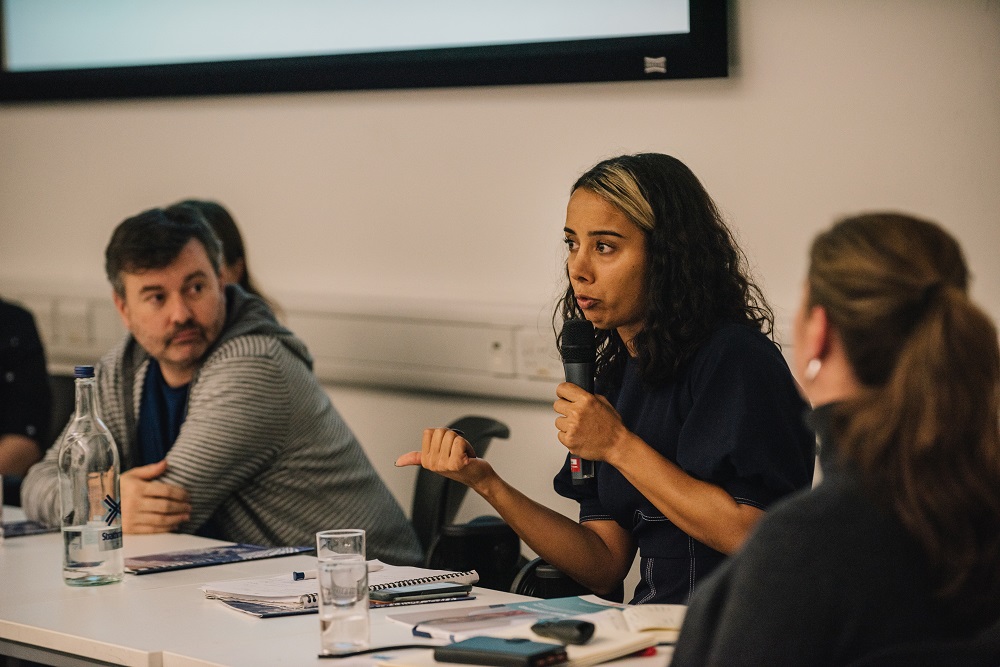 Perhaps as a result, for migrant women it takes an average of 35 incidents of violence before they feel able to report. Such anxieties are heightened by cultural factors such as Brexit, austerity and the hostile environment. Janaya identified the “decimation” of Legal Aid and specialist BAME services as further obstacles to survivors accessing the support they need. In light of these barriers, Southall Black Sisters are calling for a comprehensive policy strategy to address the issues faced by migrant survivors and ensure that people’s rights are respected and protected, regardless of their legal status – “safety should be above immigration control”. Ultimately, Gisela and Elizabeth argued, it is a question of human rights; while migrant survivors’ needs are particular, the core right to safety and autonomy is universal and must be universally protected.

To find out more about the work of the following organisations, please see website details:

Press release for the event 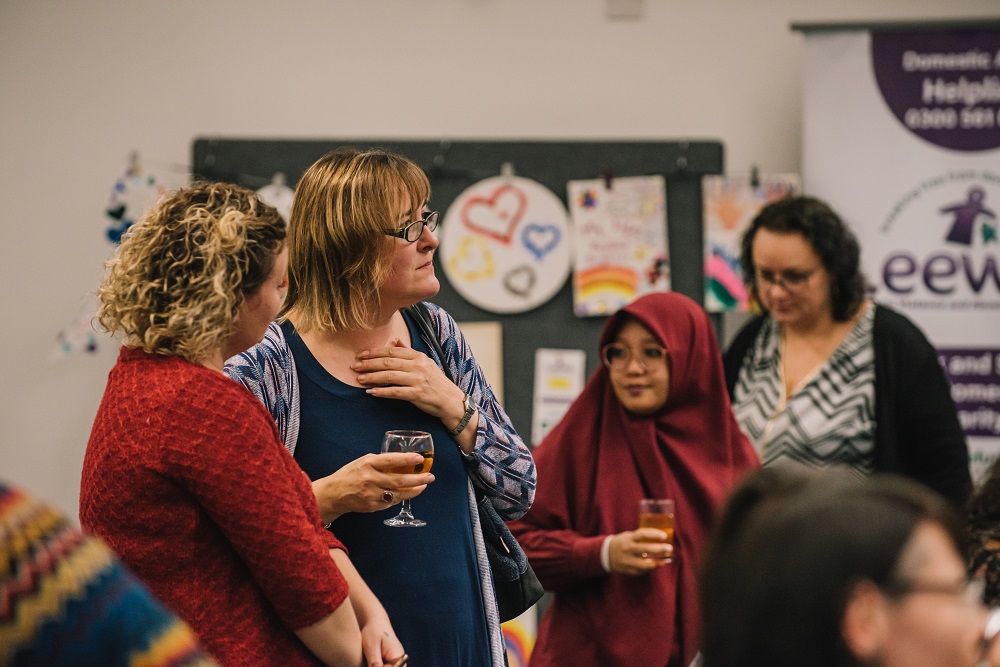