Miracle Tea is a British independent game studio made up of Tom Andrews, Bradley Smith, Enrico Ercole and Gav Amante. They are based around Ipswich in Suffolk. They aspire to make games that touch players in deeply meaningful ways.

Miracle Tea was founded in 2016 by Tom Andrews and Bradley Smith. After collaborating on freelance projects together, they teamed up to fully develop ‘Shape the Mix’, a prototype game Tom Andrews had created. Soon after that, they began re-imagining the typical casual game by designing something that had more heartfelt and meaningful qualities. The game later became known as ‘Ruya’.

Whilst juggling industry day jobs, they managed to develop Ruya during the nights competing under the Tranzfuser graduate programme. With the help of Enrico Ercole and Gav Amante, the team managed to complete and pitch a prototype that secured them a place to showcase at EGX in Birmingham. It was at that event the team became Tranzfuser finalists. They gained the opportunity to pitch to UK Games Fund. The team ventured up north to Edinburgh with a successful pitch that kick started their games studio.

These days, the team are prepping for release, reaching out to press and doing as many events as they can! Ruya will be out on iOS on November 2nd.

We like to respect your time and think of our players as forward thinking intelligent individuals. We try to reflect this in our game designs. Strong ethics in our work approach is important to us. We're a generation of game developers that want to see a change in the industry, so we are trying to lead by example for the generations below us. We embrace our limitations and multi-disciplinary skills as a small team. 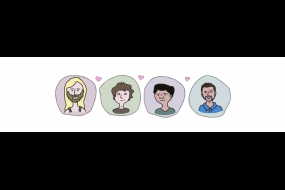